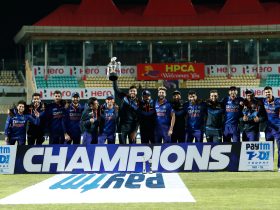 After losing the first two matches against Ireland, Afghanistan made a brilliant comeback in the five-match T20 series. Last night, they defeated the home team in the 3rd match by 22 runs to keep the hope alive. Afghan opener Rahmanullah Gurbaz became the Player of the Match for his destroying batting display. However, Afghanistan have to win the remaining two games to win the series, while Ireland need only one.

Ireland’s skipper Andrew Balbirnie won the toss in the 3rd match and decided to bowl first. So, Hazratullah Zazai and Rahmanullah Gurbaz came into the pitch to start the innings for the Afghans. Depending on their bat, Afghanistan got a flying start. Both players were very comfortable on the crease, but Rahmanullah Gurbaz was more aggressive than Zazai.

Together they made a brilliant partnership of 90 runs. However, their partnership broke in the 12th over as Rahmanullah Gurbaz left the pitch after scoring 53 runs only from 35 balls. After a while, Hazratullah Zazai also lost his wicket to Fionn Hand. He scored 39 runs before his departure.

Chasing the target, Ireland couldn’t make a decent start. Opener Paul Stirling failed once again like the previous two matches. He lost his wicket in the very first over, scoring no runs for the team. Captain Andrew Balbirnie also failed to get runs. He left the pitch with one run.

Lorcan Tucker then tried to tackle the initial disaster. But, the following three batters couldn’t contribute enough. Afghan bowler Naveen-ul-Haque literally destroyed the middle order of Ireland. Due to his aggression, Ireland lost four wickets in 36 runs. However, George Dockrell and Fionn Hand fought for their lives to win this match. Dockrell remained not out in 58 runs, while Fionn Hand lost his wicket after scoring 36 off 18 balls. After that, the remaining batters of Ireland couldn’t score enough to win this match. As a result, Afghanistan won the 3rd T20 and have kept the hope alive in this series.