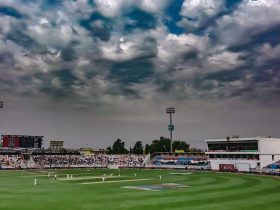 Afghanistan have leveled the two-match T20 series against Bangladesh by winning the 2nd game at Sher-e Bangla Cricket Stadium. After the poor performance in the 1st T20, the visitors have come back strongly in the 2nd game. They won the match by eight wickets with 14 balls left to bat. As a result, the 3rd T20 will become the series-deciding match for both teams.

Today, Bangladesh have hosted the Afghan to play the 2nd game of the series. Both teams remain unchanged today. Like the first match, Bangladeshi skipper Mahmudullah Riyad won the toss in the second T20 and has decided to bat first. So Munim Shahriar and Mohammad Naim started the innings for the home team.

Unfortunately, Bangladesh couldn’t make a good opening partnership in this match. Munim Shahriar couldn’t play a remarkable innings in his second match as well. He had to go back to the pavilion in the second over. After that, Liton Das came in and tried to build a partnership with the opener, Mohammad Naim.

However, neither scored big runs despite having good looks on the pitch. Liton, who got a half-century in the first game, lost the wicket early in the 2nd match. Before losing the wicket, he scored 13 runs. On the other hand, Mohammad Naim also failed today. He scored the same run as Liton did.  Moreover, Shakib remains consistent on the off-form. He is struggling with batting. Today, he departs after scoring only nine runs.

The two senior players, Mushfiqur Rahim and Mahmudullah Riyad tried to tackle the situation. They added 43 runs together on the scoreboard. However, Mahmudullah had to go back to the pavilion after adding 21 runs. After a while,  Mushfiqur Rahim lost his wicket to Fazalhaq Farooqi after scoring 30 runs from 25 balls. The remaining batsman couldn’t score a notable run for the team. As a result, the home team became all-out in 115 runs.  The Afghan bowler Farooqi got three wickets, while Azmatullah also took three.

While chasing a small target, Afghanistan lost just two wickets.  However, spinner Mehedi Hasan Miraz made the match exciting by taking the wicket of Rahmanullah Gurbaz in the second over. But Hazratullah Zazai and Usman Gani made a brilliant partnership of 99 runs, which helped the Afghans to win the match. Zazai scored 59 runs and remained not-out. On the other side, Usman Gani added 47 runs for the team. As a result, the visitors sealed the victory in 18 overs.