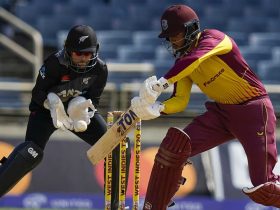 Asia Cup, the biggest cricket show in Asia, started tonight with the match between Sri Lanka and Afghanistan. Afghanistan have made a brilliant start in this tournament as they defeated Sri Lanka by 8 wickets in the first match of the Asia Cup 2022. Afghan pacer Fazalhaq Farooqi becomes the Player of the Match for taking three wickets of the Lankans.

Sri Lanka and Afghanistan played the opening match of the Asia Cup 2022 at the Dubai International Stadium. Afghans skipper Mohammad Nabi won the toss and opted to bowl first in this match. So, Sri Lanka started their batting innings with Pathum Nissanka and Kusal Mendis.

Pacer Fazalhaq Farooqi brought a brilliant start for the Afghans as he picked up Kusal Mendis in the first over. He also picked up the wicket of Charith Asalanka in the same over. Sri Lanka lost another batter in the following over as opener Pathum Nissanka departed the pitch after scoring only two runs.

Losing three wickets in just five runs, the Lankans became nervous and lost track. However, Danushka Gunathilaka tried to handle the initial disaster with Bhanuka Rajapaksa. They added 44 runs together on the scoreboard. But Mujibur Rahman couldn’t let them make a long partnership. He picked Gunathilaka in the 8th over.

However, Bhanuka Rajapaksa continued scoring runs for the team. He added the highest 38 runs for the team before losing the wicket. In addition, Chamika Karunaratne scored a crucial 31 runs in the lower order. Relying on those runs, Sri Lanka scored 105 runs in 20 overs.

Chasing the tiny target, Afghanistan have had a flying start. Hazratullah Zazai and Rahmanullah Gurbaz, the two openers of the Afghans, started hitting from the first over. They make a brilliant partnership of 83 runs on the opening wicket. However, Rahmanullah Gurbaz left the pitch after scoring 40 off 18 balls. Meanwhile, Hazratullah Zazai remained not out in this match. With Ibrahim Zadran and Najibullah Zadran, Hazratullah Zazai successfully chased the target in just 11 overs. As a result, Afghanistan won the first match of the Asia Cup by 8 wickets.