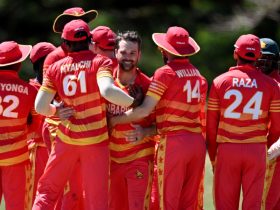 Australia’s chances for the semifinal are still alive as they defeated Afghanistan yesterday by four only runs. As a result, they earned equal points as New Zealand. But due to the low run rate, Australia stand in 2nd place with seven points. However, the victory against Afghanistan gives them hope again of playing in the semifinals.

Aaron Finch was ruled out in this match due to injury. Therefore, Matthew Wade captained Australia yesterday. However, Mohammad Nabi, the captain of Afghanistan, won the toss and decided to bowl first against the host. So, Australia started their batting innings with David Warner and Cameron Green.

Their starting was aggressive. David Warner tried to dominate the Afghans, but Cameron Green couldn’t stay long on the crease. Afghan pacer Fazalhaq Farooqi picked up Cameron Green in the 3rd over.

On the other side, David Warner kept going and scoring runs. He made a partnership of 26 runs with Mitchell Marsh. It looked like they would make a long partnership. Unfortunately, Naveen-ul-Haq bowled out David Warner in the 6th over. Moreover, he got another wicket in the same over. This time, Steve Smith departed the crease after being LBW.

Mitchell Marsh continued adding runs. He scored 45 runs from 30 balls before losing the wicket to Mujibur Rahman. After that, Glenn Maxwell came into the pitch and started playing aggressively. He hit two sixes and six fours. Moreover, Glenn Maxwell remained not out in 54 runs. Relying on his bat, Australia ended their innings with 168 runs.

Chasing the target, Afghanistan lost their first wicket in the 3rd over as Usman Ghani departed the crease with two runs. But, Rahmanullah Gurbaz handled the situation with the new batter, Ibrahim Zadran. Together they added 25 runs to the scoreboard. Anyway, Kane Richardson broke their partnership by taking Rahmanullah’s wicket.

After that, Ibrahim Zadran made another crucial partnership with Gulbadin Naib. They added 59 runs together on the scoreboard. They were heading toward chasing the runs with their partnership. But Adam Zampa changed the entire momentum in the 13th over. In this over, Afghanistan lost three important batters. Therefore, the Afghans were under tremendous pressure.

However, Rashid Khan then tried very hard to chase the target. With four sixes and three fours, Rashid remained unbeaten in 48 runs. In the end, the other batters did not contribute much, so Australia won the game and kept their semifinal hopes alive.