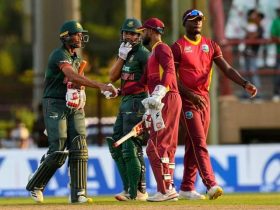 Bangladesh started the ODI series with a victory

Bangladesh welcomed Pakistan to play a T20 and a Test series at Bangladesh. However, the three-match T20 series is over. Pakistan won all the matches of the T20 series. After that, the two-match test series started yesterday.

Bangladesh test captain Mominul Haque won the toss at Zahur Ahmed Chowdhury Stadium and decided to bat first. Compared to the T20 series, both Bangladesh and Pakistan have made several changes in the playing XI. With this test match, Yasir Ali has made his debut in the Bangladesh team.

Winning the toss, two very young lads, Shadman Islam and Saif Hasan, started the innings for Bangladesh. But they both didn’t get enough runs. Saif Hasan lost his wicket to Shaheen Afridi in the fifth over of the innings. Before losing the wicket, he scored only 14 runs. The other opener Shadman Islam followed the same way as Saif did. He lost his wicket to Hasan Ali after scoring 14 runs.

Surprisingly, the first three batsmen of Bangladesh lost their wicket after scoring only 14 runs. Najmul Hossain Shanto is the third one who made another forty runs and had to go back to the pavilion. This time Faheem Ashraf got the wicket. Bangladesh test captain Mominul Haque also failed to stay longer on the pitch. He scored just six runs in the first innings.

After the bating disaster in the top order, Mushfiqur Rahim, one of the most experienced batsmen of Bangladesh, tried to make a decent partnership with Liton Das. They were looking very confident on the pitch. However, both Liton and Mushfiq got half-century yesterday. Moreover, Liton Das has made a brilliant test hundred. They remain not out on the first day of this test match.

Bangladesh seemed to score a big run. But Pakistani bowlers took control of the innings today(Day2). Liton Das has to go back to the pavilion in the morning. Hasan Ali took the wicket of him. Before losing the wicket, Liton Das scored 114 runs. Moreover, he made a record 206 runs partnership with Mushfiqur Rahim in the fifth wicket for Bangladesh.

Unfortunately, Mushfiqur Rahim missed the century for nine runs only. He lost the wicket to Faheem Ashraf after scoring 91 runs. The rest of the batsmen of Bangladesh could not score enough runs for the team. As a result, Bangladesh became all-out in 330 runs. Hasan Ali got five wickets of Bangladesh. However, Pakistan will start bating today.