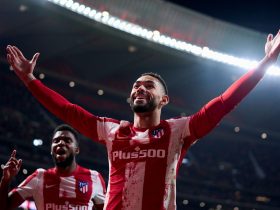 Spanish giant FC Barcelona have thrashed Atletico Madrid at Camp Nou. Last night, they beat the Simeone boys by a 4-2 margin. The match was full of excitement at Camp Nou. This victory has already been considered one of the best matches for Barcelona in this season. After this win, they have moved into the top four at the point table, which means they can play in the UEFA Champions League next season if they remain there. On the other side, Atletico Madrid slipped down from the top four after the defeat against the Xavi boys. They are now two points behind the Champions League places.

Last night, the Blaugrana welcomed Atletico Madrid at their home ground. The match was crucial for both teams to stay in the top four. So, both managers played their best possible XI last night. Xavi Hernandez, the home team manager, set up the team formation with 4-3-3. In this match, Xavi made the debut of the new two players, Adama Traore and Pierre-Emerick Aubameyang. Traore, who has joined Barcelona from Wolverhampton, was in the starting XI against Atletico Madrid.

However, both teams played very attacking football from the beginning of the match. Within a few minutes, the visitors were in the lead. Their winger Yannick Carrasco scored that goal in the 8th minute of the match. But the home team didn’t take much time to equalize. They found the equalizer within two minutes. In the 10th minute, Barca left-back Jordi Alba netted the ball.

After scoring the first goal, the home team became more aggressive. In the 21st minute, the Spanish young lad Gavi scored a goal. New signing Adama Traore assisted the goal. However, FC Barcelona doubled their lead before halftime. Defender Ronald Araujo netted the goal in the 43rd minute with the help of Ferran Torres. The first half ended in 3-1.

Returning from the break, the home team continued their aggressive style on the field. As a result, they found the fourth goal in the 49th minute. This time Dani Alves scored the goal. Anyway, the visitors created some chances at the very last moment. They played better football in the second half. In the 58th minute, Luis Suarez, the former Barcelona player, scored the second goal of Atletico Madrid. But it was not enough to get points in this match. The Simeone boys couldn’t score more in the remaining minutes. As a result, Barcelona sealed the victory on their home ground and have entered the top four.