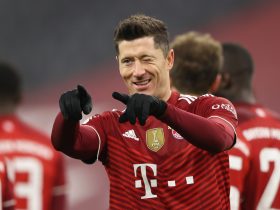 German giant FC Bayern Munich have started their new Bundesliga campaign with a massive victory. Last night, they started their journey playing against Eintracht Frankfurt at the Deutsche Bank Park Stadium, where they scored six goals in the home team’s net.

Eintracht Frankfurt welcomed Bayern Munich at Deutsche Bank Park to play the first game of the Bundesliga. Bayern boss Julian Nagelsmann set up the team formation with 4-4-2. He made the debut of Sadio Mane, who joined FC Bayern Munich from Liverpool FC during the current transfer window. He played along with Segre Gnabry. On the other side, the Frankfurt manager played his team in a 3-4-2-1 formation.

The Bavarians began the match in style. They started dominating from the very beginning of the game. Moreover, Bayern’s fans didn’t have to wait for much to see the first goal of the season. In the 5th minute, Bayern Munich took the lead as Joshua Kimmich scored a stunning goal from a free kick. Bayern doubled their lead within five minutes. This time, Benjamin Pavard netted the ball in the 10th minute.

Conceding two goals in just two minutes, Eintracht Frankfurt became shaky and got out from the track. They couldn’t even get the ball. The Bavarians created many chances in the first half. Anyway, Sadio Mane scored his first goal in Bayern’s shirt in the 29th minute with the help of Serge Gnabry.

Bayern Munich literally ran a roller coaster over the home team in the first half. They got their fourth goal in the 35th minute. This time, Jamal Musiala found the net in Muller’s assist. The fifth goal came just before halftime as Serge Gnabry scored. Frankfurt couldn’t return any goals. So, the first half ended at 5-0.

Returning from the break, the home team tried to score at least one goal. Finally, they found the net in the 64th minute as Randal Kolo Muani defeated Bayern’s keeper, Manuel Neuer. However, Bayern Munich played comparatively slow in the second half. But they scored another goal in the 2nd half. Jamal Musiala scored his second and team’s 6th goal in the 83rd minute. As a result, Bayern won the match with a massive margin of 6-1 in Frankfurt’s home.