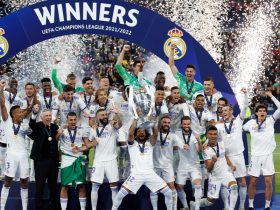 Bayern outplayed Barca in the second half

Anyway, both teams created several chances in the first half but failed to score. So, the first half ended in 0-0. But FC Bayern Munich started dominating after returning from the break. They highly pressed the opponents. As a result, Bayern Munich didn’t have to wait much to take the lead in the 2nd half.

In the 50th minute, Bayern Munich opened the scoresheet as Lucas Hernandez found the net with a brilliant header. The home team doubled their lead within four minutes. This time, Leroy Sane beat Ter Stegan to score that goal in the 54th minute. However, both teams couldn’t score more in the remaining minutes. As a result, Bayern Munich got their 2nd successive victory in the UCL.

Liverpool suffered a lot to beat Ajax at Anfield. Last night, they welcomed Ajax, the Dutch club, to play the 2nd game in the Champions League. However, Liverpool took the lead first at Anfield. Mohammad Salah scored that goal in the 17th minute. But, Ajax took only ten minutes to find the equalizer. Striker Mohammed Kudus found the equalizer for Ajax in the 27th minute.

After that, both teams tried hard to score more. Especially, Liverpool became desperate to earn the full three points at their home. But it seemed the match could end in 1-1. However, the drama was yet to come. Liverpool defender Joel Matip scored a stunning goal just before the full-time whistle. With a powerful header, he converted Tsimikas’ cross into a goal. Therefore, Liverpool beat Ajax with a 2-1 margin at Anfield.