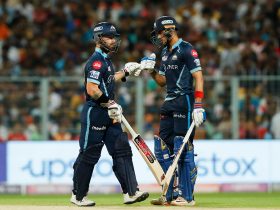 After losing two matches in a row, Delhi Capitals are back in the winning ways. They beat  Kolkata Knight Riders, the table topper, by a 44 runs margin. Delhi’s batters were in a top form against the bowlers of the KKR as they scored the highest 215 runs in this tournament. However, this victory moves Delhi to the 6th place on the table, while Kolkata Knight Riders remain on the top of the table despite losing the match.

Shreyas Iyer, the captain of Kolkata Knight Riders, won the toss and decided to bowl first at the Brabourne Stadium. So, Prithvi Shaw and David Warner started the batting innings for Delhi Capitals. They proved the decision of the KKR’s captain wrong. Because both batsmen continued picking runs on the scoreboard. Prithvi Shaw was a bit more aggressive at the start of the match than David Warner. On the other hand, David Warner also played aggressively at the end of his innings. However, both added 93 runs on the scoreboard in the opening partnership. Their partnership ended in the 9th over when Prithvi Shaw lost his wicket after scoring 51 runs.

However, David Warner made another brilliant partnership of 55 runs with the new batsman, Rishabh Pant. Before losing the wicket, Pant scored 27 runs for the team. On the other hand, Warner added a fruitful 67 runs before his departure. Relying on these scores, Delhi Capitals set a target of 216 runs for the KKR.

Chasing the massive target, Kolkata Knight Riders lost their first wicket in the 3rd over. In the 5th over, the KKR lost another one as Ajinkya Rahane departed after adding 18 runs on the scoreboard. After the early disaster, skipper Shreyas Iyer and Nitish Rana tackled the situation. They added 69 runs together on the scoreboard. The captain scored the highest 54 runs for Kolkata Knight Riders. Before losing the wicket, he hit five boundaries and two over boundaries. Furthermore, Nitish Rana added 30 runs for the team before his departure. But the remaining batters couldn’t go on to chase the target. As a result, their batting innings ended in 171 runs. Kuldeep Yadav became the Man of the Match for taking four wickets of Kolkata Knight Riders.