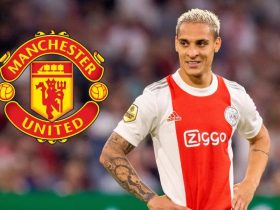 After the Champions League break, the English Premier League is back again. The EPL will feature five games today. Everton will host Manchester United at Goodison Park in the first match. After a while, Chelsea, Arsenal, and Tottenham will play in their respective games. However, Manchester United are looking for a victory after a disappointing 1-1 tie against Leicester City. Every match is a must-win game for the Red Devils if they want to get into the top four. Besides, Everton are having a very difficult time in the league. They are just one point ahead of the relegation zone. They need to win this game to avoid relegation.

In the middle of the season, Everton sacked their manager and appointed Frank Lampard, former manager of Chelsea. But their fate hasn’t changed after that. The Toffees’ poor form continues in the EPL. Everton have lost four of their last five matches in the Premier League. They are afraid of being relegated this season.

At the same time, Manchester United are not relaxed either. With 51 points, the Red Devils are standing the 7th at the league table. They have dropped massive points against Leicester City, having drawn the match. Moreover, the club has a tight fixture ahead as they will have to face Arsenal and Chelsea in the coming days.

However, the stats for Everton against Manchester United are not impressive. They have won only one of their last thirteen games against Man United. In addition,  the Red Devils have defeated the Toffees 37 times, their second-highest number against a single opponent.

Manchester United, the visiting team, have several injury issues in the squad. Cristiano Ronaldo missed the match due to illness. Moreover, the manager substituted Luke Shaw before halftime.

Yesterday, Ralf Rangnick provided the squad updates. According to him, Luke Shaw will not play against Everton. Furthermore, Edinson Cavani is still not fit for the match. Raphael Varane and Scott McTominay will also miss the game due to injury.

On Everton’s side, Donny Van de Beek, who has joined the Toffees from Manchester United on loan, will miss the match today. He has played six games for Everton and missed several games due to injury. However, the toffees will miss the service of Yerry Mina and Andre Gomes. Manchester United have sealed a comfortable victory against Reading in ... Frank Lampard is going to lose his job at Everton ...