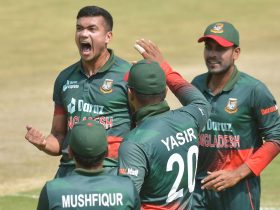 England welcomed South Africa to play a three-match T20 and a three-match Test series. The T20 series started last night at the Gloucestershire Cricket Ground, where the home team defeated South Africa by 41 runs. English batsman Moeen Ali scored the fastest fifty in the history of England, scoring 50 runs in just 16 balls. He also won the Player of the match award for his brilliant performance.

David Miller, the captain of South Africa, won the toss and decided to bat first in the first T20. But it was a big mistake for the Proteas as England became very aggressive from the beginning of their batting innings. Jason Roy and Josh Buttler, the two openers of England, started hitting from the first over. However, Jason Roy was a bit slower than Josh Buttler. Buttler hit two sixes and two fours before losing the wicket. Jason Roy also couldn’t go far as Lungi Ngidi took his wicket in the 5th over.

After that, David Malan and Jonny Bairstow made a brilliant partnership. They picked up 71 runs together on the scoreboard. Both batsmen tried to hit every ball they faced. Unfortunately, David Malan missed the half-century only for seven runs as Phehlukwayo took his wicket in the 12th over. But Jonny Bairstow kept scoring runs. He made another partnership of 106 runs with the new batsman, Moeen Ali.

Moeen Ali was fearless from the start. With six sixes and two fours, Moeen Ali scored 52 runs in just 18 balls. Moreover, Moeen got a half-century in 16 balls only, which is the fastest fifty for any English batsman. On the other hand, Jonny Bairstow ended his innings in 90 runs. Relying on their runs, England scored 234 runs in 20 overs.

Defending target, England got a flying start as they picked up the first wicket in the 2nd over. English bowler Reece Topley picked up Quinton de Kock. In the same throughout, South Africa lost another wicket as Rilee Rossow left the pitch, scoring only four runs.

The remaining Protea batsmen couldn’t contribute enough except Tristan Stubbs. He fought for his life to win the match. Tristan Stubbs scored 72 runs from only 28 balls. Unfortunately, the other players couldn’t score enough. As a result, England won this match by 41 runs.