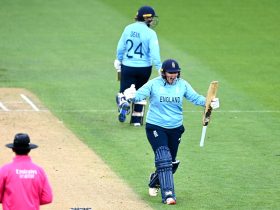 England won a thrilling match in the Women’s World Cup

England have come to the West Indies to play a three-match test series against the Caribbean. The first test match of the series has started already. The visitors have already played their first inning, where they became all-out for 311 runs. Today, the home team started their first innings. They successfully passed Day 2 and are looking to score a big run.  As of now, the West Indies have added 202 runs to the scoreboard for four wickets.

England have come to West Indies without James Anderson and Stuart Broad, two of their best pacers. Both are the most successful pacer for England in the test format. Unfortunately, the injury couldn’t allow them to play this test. Meanwhile, the Caribbean had no injury concerns. However, the English skipper Joe Root won the toss at the Sir Vivian Richards Stadium and decided to bat first.

After deciding to bat first, Alex Lees and Zack Crawley started the innings for England. But they couldn’t contribute a lot to the team. Both players lost their wickets very early. Skipper Joe Root also departed after scoring 13 runs only. The visitors looked they would become all-out before 200 runs. But Jonny Bairstow handled the situation bravely. He played very carefully against the Caribbean bowlers.

On the other side, Jonny Bairstow played a brilliant innings for the visitors.  He scored 140 runs before losing the wicket. Unfortunately, the remaining batsmen couldn’t support him. As a result, England became all-out in 311 runs. However, Bowler Jayden Seales picked up four wickets alone.

West Indies have had a decent start today. They added 83 runs in the opening partnership. Skipper Kraigg Brathwaite got a half-century today. But, the home team lost three wickets quickly at the end of the day. Between 83 to 111 runs, the Caribbean lost three players. However, Jason Holder and Nkruma Bonner are still on the pitch. With them, West Indies picked up 202 runs after the second day.  They will start batting tomorrow.