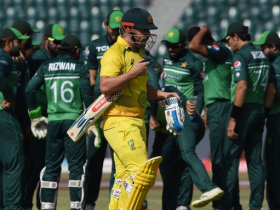 England completed a clean sweep as they won all three matches against Pakistan. The third test of the series started on December 17, and after playing for four days, England sealed the victory today.

Shan Masood added 30 runs, but Azar Ali helped Pakistan make a big score. With Babar Azam, Azar Ali added 71 runs. However, Azar Ali lost his wicket after adding 45 runs. On the other side, Babar Azam didn’t miss the half-century. He scored the highest 78 runs for Pakistan. In addition, Agha Salman scored 56 runs in the lower order. Relying on their scores, Pakistan ended their first innings with 304 runs.

England started poorly in their first innings. Zak Crawley lost his wicket in the very first over. But, Ben Ducket and Ollie Pope handled the situation smartly. They added 58 runs together on the scoreboard. In the 13th over, England lost two back-to-back wickets. Ben Ducket and Joe Root returned to the pavilion in that over. However, Harry Brook scored a brilliant century in this innings, which helped England to score 354 runs.

For Pakistan, captain Babar Azam and Saud Shakeel got half-centuries each. But their partnership couldn’t help Pakistan to score more than 216 runs. Therefore, England needed only 167 runs to win this match.

Chasing the target, England had a brilliant start. Zak Crawley and Ben Ducket added 87 runs together on the scoreboard. Although Zak Crawley departed the pitch with 41 runs, Ben Duckett scored the highest 82 runs for England.

England lost one more wicket as Rehan Ahmed lost his wicket to Abrar Ahmed. But it didn’t affect the result. England comfortably won the match by eight wickets.