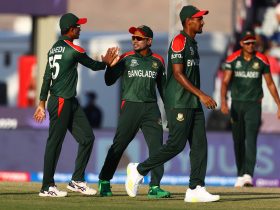 Kane Williamson won the toss and decided to bat first in the third match. As we reported before, Daryl Mitchell was leading the Kiwis. Depending on his bat, New Zealand scored 329 runs in the first innings. On the other hand, England batted brilliantly in their 1st innings. Jonny Bairstow’s tremendous 162 runs helped England to score 360 runs. As a result, the home team took a lead of 31 runs in the first innings.

Like the first innings, New Zealand didn’t make a good start in the second innings as well. They lost the first wicket in the 8th over. Will Young departed the pitch after scoring 8 runs only. After that, Tom Latham made a brilliant partnership with the captain, Kane Williamson. Together they added 97 runs on the scoreboard. However, their partnership broke when Tom Latham lost his wicket in the 34th over. But he scored 76 runs for the team before his departure.

After a while, Kane Williamson also followed the same way. He missed the half-century only for two runs. However, Daryl Mitchell and Tom Blundell played important innings for the team. Mitchell, who scored a century in the first innings, also scored a half-century in the second innings. But he departed the pitch after scoring 56 runs. On the other hand, Tom Blundell remained not out in 88 runs. However, the remaining Kiwi batters couldn’t score enough. As a result, New Zealand became all out in 326 runs.

England needed 296 runs in their second innings to win the test. But chasing the target, England lost two early wickets. In the 5th over, Alex Lees lost his wicket, while Zak Crawly departed the pitch after scoring only 25 runs. However, the scenario changed at the 4th wicket. Ollie Pope made a partnership of 134 runs with Joe Root.

Unfortunately, Ollie Pope lost his wicket in the 40th over. But Joe Root kept scoring runs. He chased the target with Jonny Bairstow. Both remained not out in this innings. Root scored 86 runs, while Bairstow got 71 runs for the team. As a result, England won the 3rd test by seven wickets.