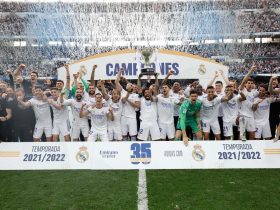 Catalan club FC Barcelona have missed the chance to go in the top four, dropping points against Sevilla. The match between Barcelona and Sevilla has been drawn at Ramon Sanchez Pizjuan. As it stands, Sevilla remain in 2nd place while Barca are in the 7th. But the Catalan club could have gone in the top four if they beat the Los Nervionenses last night.

Last night Barcelona traveled to Ramon Sanchez Pizjuan, the home ground of Sevilla FC. The home team is having a great time in La Liga this season. They are the second team in the point table, five points behind the table topper. Before the match against Barcelona, Sevilla were just three points behind Real Madrid.

On the other side, Barcelona has been struggling since the start of this season. They have already been knocked out of the UEFA Champions League. But gradually, they are trying to settle down in La Liga.

However, Julen Lopetegui, the home team manager, set up the team formation with 4-3-3. In opposite, Barca boss Xavi Hernandez played his team in the same style. He used Jutlga Blanc as the center forward instead of Philipe Coutinho.

But the home team took the lead first. Argentine forward Papu Gomez scored the goal for Sevilla. He scored in the 32nd minute with the help of Ivan Rakitic. However, Rakitic was the Barca player once. He joined Sevilla FC from the Catalan club as a free agent.

Just before half-time, the visitors equalized as Ronald Araujo found the net. Osman Dembele crossed the ball inside the box, and Araujo converted it into the goal with a brilliant header. As a result, the Xavi boys leveled with the home team in the first half.

Coming back from the break, both teams tried desperately to take the lead but failed to find the net in the second half. However, the visitors were clearly the better side in this match. They took a total of 23 shots in this game. Despite playing at home, the host team could not take control of this match. Moreover, defender Jules Kounde was sent off as he fouled Jordi Alba illegally. The match ended in a 1-1 draw as both teams failed to score more in the second half.