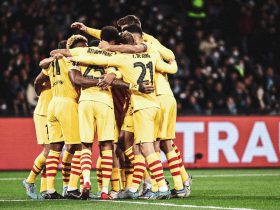 Spanish club FC Barcelona have returned to the winning way as they won two consecutive matches after drawing the first one. Last night, Barcelona defeated Real Valladolid at Cam Nou, the home of Barcelona. This victory has moved Barcelona to third place, just one point behind Real Madrid.

Barcelona welcomed Real Valladolid at Camp Nou last night. Barca manager Xavi Hernandez made the debut of his new signing, Jules Kounde, with this match. However, the manager set up the team formation with 4-3-3, where he deployed Robert Lewandowski alongside Raphina and Ousman Dembele in the front. On the other hand, Valladolid’s manager played his team in a 4-1-4-1 formation.

As the home team, FC Barcelona had been dominating from the start of the game. They created many chances in the first half. But the home team had to wait until 24 minutes to take the lead. Robert Lewandowski, who joined Barcelona from FC Bayer Munich during this transfer window, scored this goal in the 24th minute for the team. Moreover, Barcelona doubled their lead as Pedri found the net in the 43rd minute. Valladolid couldn’t find the net in the first half. So, the home team went to the break with a two-goal lead.

Xavi’s boys took full control of the game after the interval. They pressed the opponents highly to find the net. In the 64th minute, Robert Lewandowski scored his second and team’s 3rd goals with the help of Ousman Dembele. Furthermore, Sergi Roberto scored a brilliant goal in the injury time of the match. As a result, FC Barcelona sealed a victory against Real Valladolid by a four-goal margin.

Barca manager Xavi Hernandez is very pleased to get three points from home. He praised Lewandowski for the brilliant performance. After the post-match reaction, Xavi said, “Lewandowski is a natural goalscorer, but he also helps us a lot in defense. We all know what Lewandowski can do. He’s a striker of the highest caliber.”

“I think Lewandoski is an extraordinary player. He is a natural leader and a born worker. He is an example for the squad. Lewandowski is adaptable. He helps his colleagues and even helps us as the technical staff. It’s great to have him with us,” the manager added.