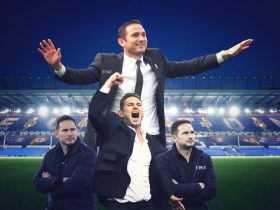 Is Lampard able to take Everton to the top six?

The world champion France have won the UEFA Nations League trophy, beating Spain by 2-1. Kylian Mbappe and Karim Benzema scored one goal each for France. Meanwhile, Mikel Oyarzabal scored a goal for Spain.

France and Spain have played the final of the UEFA Nations League at San Siro, Italy. Spain boss Luis Enrique set up the formation with 4-3-3. On the other side, Didier Deschamps, who has won the world cup with France, played his team in the formation of 3-4-1-2.

Both France and Spain could not open the score sheet in the first half. Spain created some chances but could not score. They kept more possession on the ball than the world champion France. But France seemed more dangerous when they got the ball. The French boys tried to score from the counterattack. However, the first half ended 0-0.

In the second half, Spain took the lead first. Mikel Oyarzabal scored in the 64th minute for Spain. The Barca midfielder Sergio Busquets helped him to find the net. But Spain could not hold the lead for a long time. France have equalized within two minutes. Karim Benzema was the man who helped France to level with Spain. He scored in the 66th minute with the help of Kylian Mbappe. However, the understanding between Benzema and Mbappe is very remarkable. Almost every game, they help each other to score goals. Moreover, Benzema is having a great time both for the club and the country.

In the 80th minute, France took the lead with the goal of Kylian Mbappe. Midfielder Theo Hernandez passed the ball towards Mbappe. It looked like Mbappe was on the offside. But the referee did not raise the flag. So Mbappe kept going on and scored the second goal.

Spain could not score in the remaining ten minutes. As a result, France won the trophy of the UEFA Nations League for the very first time.

Karim Benzema spoke to the media after the match. He said,

This is the first piece of silverware I’ve won with France. So, I’m very proud and delighted. We played two top-level performances.  We went out there to win the trophy so I’m delighted for the team as a whole and I’m proud as an individual.