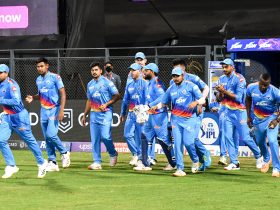 Gujarat Titans and Rajasthan Royals played the first playoff round as the top two teams in the point table. Hardik Pandya, the captain of Gujarat Titans, won the toss at the Eden Garden and decided to bowl first. So, Yashavsi Jaiswal and Josh Buttler came into the pitch to start the innings for the Royals.

Their starting wasn’t fruitful as Jaiswal departed the pitch early. He lost the wicket in the second over of the match. But, Josh Buttler made a brilliant partnership with the skipper, Sanju Samson, to tackle the situation. They added 68 runs together on the scoreboard. Buttler was very aggressive on the pitch. The captain also played attacking innings as well. But his innings came to an end in the 10th over. Sai Kishore picked up the wicket of Sanju Samson.

After that, Josh Buttler fought alone as the remaining batters couldn’t contribute much. The England international scored the highest 89 runs for the Royals before losing the wicket. However, their innings ended in 188 runs for six wickets.

Defending this score, Rajasthan Royals had a brilliant start. They picked up the first wicket in the very first over. Kiwi bowler Trent Boult took the wicket of Wriddiman Saha. Shubman Gill, the other opener, and Matthew Wade played a vital role in this match. They made a partnership of 72 runs for the team. But, both batsmen lost their wickets between 8 to 10 overs.

However, captain Pandya and David Miller did not let the team under pressure. They batted brilliantly to chase the target. Moreover, both batters remained not out in this match. In the last over, Gujarat needed 16 runs, and guess what? David Miller hit three sixes in the first three balls of the last over to win the match.