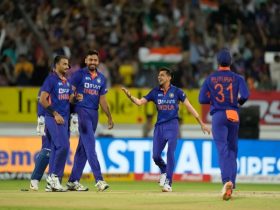 India and West Indies finished their five-match T20 series last night. India, the visiting team, have dominated in the entire series. They secured the series before. Last night, India faced West Indies in the last match of the series, where the visitors defeated West Indies by 88 runs. Indian spinner Axar Patel won the Player of the Match award for taking three wickets in 15 runs. In addition, Arshdeep Singh became the Player of the Series for his brilliant performance throughout the series.

In the 5th T20, Indian captain Hardik Pandiya won the toss and decided to bat first. So, Ishan Kishan and Shreyas Iyer came off the pitch to start the innings for India. Both batters looked good on the crease. Unfortunately, they couldn’t make a long partnership as Ishan Kishan lost his wicket in the 5th over. After that, Shreyas Iyer made a brilliant partnership with the new batter, Deepak Hooda. Together they added 76 runs on the scoreboard. However, India picked up 100 runs in 10.2 overs.

Deepak Hooda, unfortunately, lost his wicket to Hayden Walsh after scoring 38 off 25 balls. Shreyash Iyer also departed the pitch in the next over. But he scored the highest 64 runs for the team. Relying on their runs, India scored 188 runs in 20 overs.

West Indies, the home team, had a poor start in chasing the target. They lost the first wicket in the very first over as Jason Holder departed the pitch without scoring any runs. West Indies lost two more wickets in 5 overs. Losing three quick wickets, the home team lost track.

But Shimron Hetmyer fought for his life to chase the target. He was very determined to tackle the disaster. Shimron Hetmyer added a very crucial 56 runs from 35 balls. Before the departure, Hetmyer hit four sixes and five sixes. Unfortunately, the remaining batters of the West Indies couldn’t contribute enough to win this match. Furthermore, five batsmen of the West Indies returned to the pavilion without scoring any runs. Consequently, West Indies were all out for 100 runs, giving India an 88-run victory.