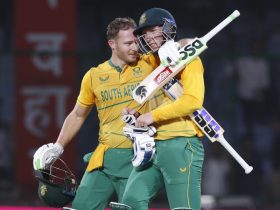 New Zealand have won the match against Afghanistan last night. It was an important match for the Kiwis because they had to win this game to qualify for the semifinals. However, Afghan captain Mohammad Nabi decided to bat first after winning the toss at Sheikh Abu Zayed Stadium.

Due to the aggression of the Kiwi bowlers, the Afghan batsmen could not stay longer on the pitch. The first three batsmen of Afghanistan could not cross ten runs individually. Afghanistan lost their first wicket as Adam Milne picked the wicket of Mohammad Shahzad in the 3rd over. Afghanistan lost another two wickets in the next two overs. Hazratullah Zazai and Rahmanullah Gurbaz had to go back to the pavilion within six overs.

But other batsmen could not support him perfectly. As a result, Afghanistan scored 124 runs in 20 overs.

Chasing a low target, New Zealand lost only two wickets and won the match. Both openers of New Zealand have had a good start in this match. They added 26 runs together on the scoreboard. Then, Daryl Mitchell lost his wicket to Mujib after scoring 17 runs. The other opener Martin Guptill had to go back to the pavilion after scoring 28 runs. Afghan spinner Rashid Khan took the wicket of Martin Guptill.

However, New Zealand skipper Kane Williamson finished the innings with Devon Conway. Williamson scored 40 runs, and Conway scored 36. Relying on those two, New Zealand won the match in 18 overs and secured a place in the semi-final of this tournament.