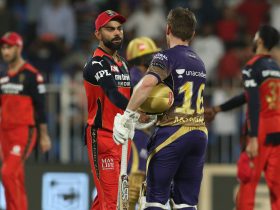 India have won the three-match ODI series against West Indies, having won the first two consecutive matches. In the 2nd ODI, the home team beat the Caribbean at Narendra Modi Stadium by 44 runs. Both teams will face tomorrow to play the last match of this series.

Last night, West Indies skipper Nicholas Pooran won the toss and decided to bowl first. The captain chose to ball first as the Caribbean pacers have been doing great recently. Pacer Kemar Roach made the captain’s decision right by picking up the wicket of Rohit Sharma in the third over.

India lost two more wickets within a very short time. In the 12th over, Rishabh Pant lost his wicket after scoring 18 runs. In the same over Virat Kohli, the former captain of India had to go back to the pavilion. He also scored 18 runs before losing the wicket.

After that, KL Rahul made a brilliant partnership with Surya Kumar Yadav. They added 89 runs together on the scoreboard. Unfortunately, Rahul missed the half-century only for one run. On the other side, Surya Kumar continued scoring runs. He scored 64 runs before losing the wicket, the highest individual score for India.

However, the remaining batsmen couldn’t score notable runs. As a result, India scored 237 runs in 50 overs. Odean Smith and Alzarri Joseph got two wickets each. In addition, Kemar Roach, Fabian Allen, Jason Holder, and Akeal Hosein picked up one wicket for each.

Chasing the low target, West Indies couldn’t make a long partnership. They added 32 runs in the opening partnership. They lost their first wicket in the 8th over as Brandon King had to go back to the pavilion after scoring 18 runs. In the middle order, Sharma Brooks scored 44 runs for the Caribbean. It was the highest individual runs for the visitors.

After that, Akeal Hosein added 34 runs from 52 balls. The remaining players of the West Indies could not score enough runs to win the match. They became all-out in 193 runs. As a result, India won the second game and have secured the three-match series. Indian pacer Prashad Krishna got four wickets in this match.