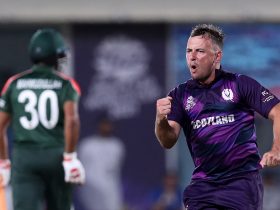 Ireland have won two consecutive matches in the five-match T20 series and took a 2-0 lead against Afghanistan. Last night, they faced the Afghans in the 2nd game at Stormont, where Ireland defeated the visitors by five wickets. Now the home team needs to win just one of the remaining three matches to seal the series.

Mohammad Nabi, the T20 skipper of Afghanistan, won the toss in the 2nd match and opted to bat first. So, they started their batting innings with two openers, Rahmanullah Gurbaz and Usman Ghani. But both batsmen failed to make a good score for the team. They both returned to the pavilion after scoring one run for each.

However, Hashmatullah Shahidi tried alone to make a good result. He tried hard to make a partnership with Ibrahim Zadran. But their efforts didn’t work out. Their partnership ended in the 6th over after adding 21 runs only. Ibrahim Zadran lost his wicket to Curtis Campher, scoring 17 runs for the team.

On the other side, Hashmatullah Shahidi scored the highest 36 runs for Afghanistan. But the remaining batters couldn’t contribute enough. As a result, Afghanistan ended their innings in 122 runs. Four bowlers of Ireland got two wickets for each in this match.

Chasing the small target, Ireland failed to get a good start. Opener Paul Stirling lost his wicket to Naveen Ul Haque in the 3rd over. But Andrew Balbirnie then made a brilliant partnership with the new batter, Lorcan Tucker. Together they added 65 runs on the scoreboard, which built a basement for the home team.

Both batsmen looked very comfortable on the pitch, but Andrew Balbirnie suddenly lost his wicket in the 12th over. But, before his departure, Balbirnie scored the highest 46 runs for the Irish. At a point, it seemed Afghanistan could defend their runs. They picked up two wickets of Ireland in the 13th over.

But George Dockrell was very impressive on the wicket. He added a very crucial 25 runs in the middle order. Relying on his bat, Ireland successfully chased the target in 19 overs, losing five wickets. As a result, Ireland won the 2nd match and took a 2-0 lead in the five-match T20 series.