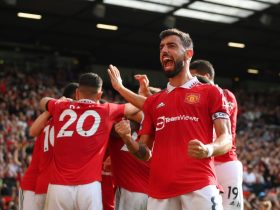 Leicester City are having a very tough time in the English Premier League. They are at the bottom of the point table. However, after losing six matches, the Foxes secured their first victory in the league last night. Last night, Leicester City hosted Nottingham Forest at the King Power Stadium, where the home team beat Nottingham Forest by scoring four goals.

After six defeats, including five straight, Leicester City were desperate for a win. Last night, they welcomed Nottingham Forest at King Power Stadium. Leicester boss Brandon Rodgers set up the team formation with 4-1-4-1. He deployed Jamie Vardy in the front while James Maddison and Tielemans played behind him. On the other hand, Forest’s boss played his team in a 4-2-3-1 formation.

However, both teams played very competitive football from the start of the game. But the home team took control of the game eventually. Leicester City created some crucial chances in the first half. But the Foxes have to wait until 25 minutes to take the lead. English midfielder James Maddison scored a stunning goal in the 25th minute outside of the box.

Scoring the first one, the home team became very aggressive. Therefore, they doubled their lead within two minutes. This time, Harvey Barnes found the net in the 27th minute with the help of Jamie Vardy. However, Nottingham Forest failed to respond back. They became unorganized on the field. Their defense was very shaky after conceding two goals.

Leicester City took that advantage and pushed the opponents more. Therefore, James Maddison got his second goal in this game. He beat the Forest goalkeeper in the 35th minute with a stunning free-kick. Nottingham Forest couldn’t return a goal in the first half. As a result, Leicester City went to the break with a three-goal lead.

Coming back from the interval, Nottingham Forest tried to find the net. They played relatively better football in the 2nd half than in the first half. Unfortunately, Leicester City defended very well and didn’t concede any goals. Moreover, they scored again as Patson Daka found the net in the 73rd minute. Both teams couldn’t score more in the remaining minutes. As a result, Leicester City bagged three points and got their first victory in the league.