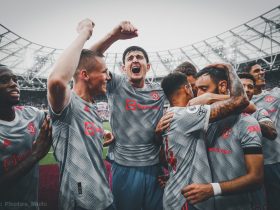 Liverpool still have hopes to win the title of the English Premier League as they beat Southampton last night by 2-1. With 89 points, Liverpool are just three points behind the table topper, Manchester City. However, both teams have one game left in this season. The champion of this season will be determined on Sunday. If Manchester City lose their last match, Liverpool will have a great chance to win the league title.

Last night, Liverpool traveled to St. Mary’s Stadium to play against Southampton. Jurgen Klopp, the manager of Liverpool, set up his team formation with 4-3-3. But he didn’t get the service of his two key players, Mo Salah and Virgil van Dijk. Mohammad Salah got a knock against Chelsea FC in the final of the FA Cup. So the manager didn’t take any risk by keeping Salah in the squad. On the other hand, the Southampton manager played his team in a 5-4-1 formation.

The home team stunned the visitors at the beginning of the match. They scored a brilliant goal in the 13th minute as Nathan Redmond found the net. But Liverpool were very desperate to win the game. They had to win the match to stay in the title race. So, the Klopp boys created some big chances after conceding the first goal. As a result, they didn’t have to wait longer to find the equalizer. Forward Takumi Minamino scored the equalizing goal for the All Reds in the 27th minute. However, both teams couldn’t score more in the remaining minutes of the first half. So, the first half ended in a 1-1 tie.

Coming back from the break, Liverpool started playing more attacking football. They kept more possession of the ball in the second half. Finally, the visitors took the lead in the 67th minute from the corner kick. Defender Joel Matip converted the corner kick into a goal with a brilliant header. That goal earned Liverpool a crucial victory as Southampton couldn’t score in the remaining minutes. As a result, Liverpool won the match by 2-1 and packed a full three points from St. Mary’s Stadium.