The UCL: Quarter Final Line Up

Once again, Manchester City have lifted the Premier League trophy. In the last five years, we have been seeing the dominance of Manchester City in the English Premier League. They won four of their six league titles in the last five years. Last night, the Citizens conquered their sixth league title by defeating Aston Villa in a dramatic match. They successfully returned three goals to win the game, despite conceding two goals in the first half.

There was a long wait until the very end of the season to find out who won the EPL title. On the final day, Manchester City needed to earn just one point. But they were about to lose the title to Liverpool. This was because the Guardiola boys were very close to losing the match against Aston Villa.

Last night, Manchester City welcomed Aston Villa to play the last game of the season at the Etihad Stadium. In this match, Guardiola set up the team formation with 4-3-3. On the other side, Aston Villa’s manager played his team in a 4-2-3-1 formation.

The Etihad stadium was full of Man City fans as they were close to winning the league title. But Aston Villa stunned the home team in the 37th minute. Matty Cash scored a brilliant goal to take the lead against the Citizens. However, Manchester City couldn’t find the equalizer in the first half, although they tried very hard.

Returning from the break, Man City had gone wild. They fought for their lives to save at least one point. But Aston Villa made the entire stadium silent as they doubled the lead in the 69th minute. This time, Philippe Coutinho, the former player of Liverpool, scored a stunning goal for the visitors.

Guardiola had earlier brought in Ilkay Gundogan to replace Bernardo Silva. And guess what? This man changed the game magically. In the 76th minute, Gundogan scored the first goal in the match for the Citizens, which gave a little hope.

After scoring the first goal, Manchester City literally run a roller-coaster over Aston Villa. They equalized within two minutes as Rodri found the net with a bullet shot. Moreover, Ilkay Gundogan scored another goal in the 81st minute, which earned Man City a dramatic victory against Aston Villa. By winning this game, the Citizens won the league by just one point over Liverpool. 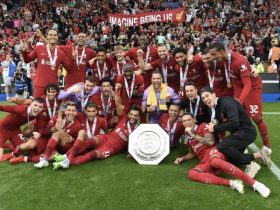