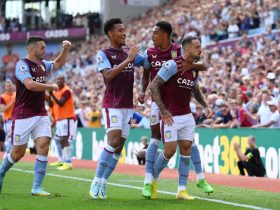 Aston Villa get their first victory in the new campaign

English giant Manchester City have defeated Wolverhampton Wanderers to go to the top of the table. Today, they faced Wolverhampton in an away match at the Molineux Stadium. However, Man City scored three goals against the home team. This victory has moved the Citizens to the 1st position, two points ahead of Arsenal.

Manchester City have returned to Premier League action after a successful mission in the UEFA Champions League. Today, they played against Wolverhampton Wanderers at the Molineux Stadium, where the Citizens scored three times to beat the home team.

However, Man City boss Pep Guardiola made some changes in the squad compared to the match in the UCL. He deployed Jack Grealish in the starting XI and replaced Kyle Walker with John Stones. Pep Guardiola set up the team formation with 4-3-3. On the other side, the Wolves boss also played his team in a 4-3-3 formation.

Manchester City stunned the home team by scoring a brilliant goal within 60 seconds. Jack Grealish scored that goal in the very first minute of the match with the help of the midfield maestro, Kevin de Bruyne. Kevin de Bruyne has recorded six assists this season with this one.

Scoring the goal early, Man City desperately wanted more goals. They highly pressed the home team in the first half. As a result, the Guardiola boys didn’t have to wait much to find the net. This time, Erling Haaland came into the spotlight as he scored a brilliant goal in the 16th minute. This one is Haaland’s 11th goal so far in this season.

Conceding two goals in a very short time, Wolverhampton became unorganized on the field. Moreover, they became a ten-man army as Nathan Collins was booked a red card in the 33rd minute. The home team also failed to return a goal in the first half. As a result, City went to the break with two goals lead.

Returning from the break, Manchester City kept creating chances. In the 69th minute, the visitors got their third goal. Phil Foden, this time, found the net for the Citizens with Kevin de Bruyne’s assist. Both teams couldn’t score more in the remaining minutes. Therefore, Manchester City won the match with a three-goal margin.