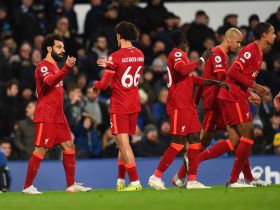 No one won in a 4-goal thrilling match at the Etihad Stadium. The home team, Manchester City, took the lead twice, but Liverpool equalized both times within minutes. So, the game ended in a thrilling 2-2 draw at the home of Manchester City. As a result, the point table stands the same. Man City remain on the top of the table with 74 points, while Liverpool are just one point behind them. The title race is still open for both teams as they can close the gap by one point in the remaining seven matches.

Last night, Manchester City hosted Liverpool FC at the Etihad Stadium to play a crucial match. Pep Guardiola, the home team manager, set up his team formation with 4-2-3-1. He made some notable changes in the squad. Guardiola started with Gabriel Jesus and Raheem Sterling,  who are not regular starters for Manchester City. On the other side, Jurgen Klopp played Liverpool with his classic 4-3-3 formation.

As the home team, Man City got tremendous support from the stadium. That boosted the team’s performance rapidly. The home team tried to dominate from the beginning of the match. As a result, Manchester City took the lead in just five minutes as their midfield maestro, Kavin de Bruyne, netted the ball for the Citizens. Scoring the early goal, the home team had gone wild. But Liverpool didn’t take much time to equalize. Liverpool forward Diogo Jota leveled with Man City, scoring a magnificent goal in the 13th minute.

However, the Guardiola boys continued pushing the visitors as they wanted to secure the full three points at the home ground. Finally, they took the lead just before half-time. Brazilian forward Gabriel Jesus scored a brilliant goal with the help of Phil Foden. As a result, the home team went to the break with one goal lead.

Returning from the break, Liverpool tried desperately to equalize again. And guess what? The Klopp boys scored a goal immediately in the second half. Mo Salah gave an unbelievable pass to Sadio Mane, and he didn’t miss the chance to score. As a result, Liverpool leveled again with the home team. In the remaining minutes, both teams attempted to score more, but no one succeeded. So after 90 minutes, the match ended in a 2-2 draw.