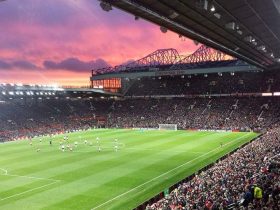 Michael Carrick, the interim manager of Manchester United, made some changes in the starting XI. He dropped Ronaldo and Bruno in the match against Chelsea, but both were in the starting Xi against Arsenal last night.

The home team manager, Michael Carrick, set the team formation with 4-2-3-1. On the other side, Mikel Arteta played his team in a 4-4-1-1 formation.

The visitors took the lead first as midfielder Smith Rowe scored in the 13th minute. It was a controversial goal because Manchester United goalkeeper De Gea was laid on the ground due to an injury at the time. After the VAR checking, the match referee gave the goal to the Gunners. However, Manchester United equalized in the first half as well. Bruno Fernandez scored with a bullet shot in the 44th minute.

Don’t miss:  Liverpool continues their winning run in the EPL

Conceding the goal, Manchester United became more aggressive. They were pushing to take the lead. As a result, Odegaard had to foul Fred inside the box to stop him, and the referee gave a penalty. Ronaldo took the penalty kick in the 70th minute and made no mistake. Arsenal could not score in the remaining minutes. So that, Manchester United won the match by a 3-2 margin.

It wasn’t an easy decision by any stretch. Anyone that knows me knows how much I love the club. When you’re here you’ve got to dedicate everything and my life has revolved around this place for so long. I did promise my family when I finished playing we’d have some time to spend together and that never happened because I jumped into the coaching role. As things pan out, things happen for a reason and it felt natural to make that decision.