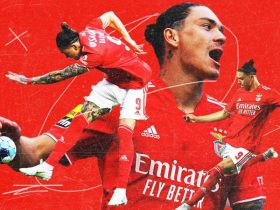 Manchester United are ready to return to their home after a long time. Today, they will host Newcastle United at Old Trafford. The Ten Hag boys are in a good vibe as they won their last three games in all competitions. Man United defeated Omonia in both legs in the UEFA Europa League, and they beat Everton earlier in the Premier League clash at Goodison Park.

Manchester United are in 5th place on the table with 15 points. On the other hand, Newcastle United are just one point behind the Red Devils. Due to this, this match is crucial for both teams in order to make a difference in the standings.

Yesterday, Manchester United boss Erik Ten Hag had a press conference with the club media ahead of the Sunday clash with Newcastle. He discussed a lot of things. You can find them here:

”It is always the same. We respect the opponent. As you say, it is a tough opponent, but we know we have to play our best to get the right result.”

Don’t miss:  Future of Ronaldo and Casemiro at Man United

Manchester United have defended very well against the big teams, such as Liverpool, Arsenal, and Everton. While he was asked about the defense, Ten Hag said, “Not only about the defence, it’s about defending with 11 players, and we need the right organisation. We need the intensity, and we need the right mentality to fight for each other, and everyone has to take the responsibility to do the positioning well, anticipating well – especially also in battles, you have to go for it, you have to win them.”

“In possession, I talk about principles, so there is freedom. But in defending, there are rules – there are no ifs and buts, and you have to be 100% concentrated and disciplined to fulfill those rules. If you are not, you get punished. We want to avoid that,” the manager added.

Ten Hag has talked about the possibility of getting him on Sunday. The manager said, “‘I can’t say at this moment. It’s too early to say something about that. We have to wait, we have to see how it progresses in the coming hours. Of course, we hope he will be available but if not, we do it with other players because it’s always about the players who are available and we have a good squad, as you see, and also subs can make a difference. If he is not available, then we have to do it with other players. We will have 20 in the squad and they have to win this game.”