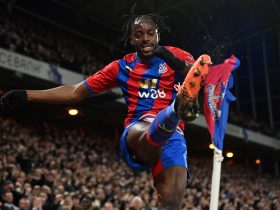 Last night, some big names such as Liverpool, Juventus, and Atletico Madrid played in their respective leagues. Atletico Madrid and Juventus won comfortably, but Liverpool failed once again to get their first victory of the season.

After losing points in the first match of the new campaign, Liverpool welcomed Crystal Palace at Anfield last night. But the Klopp boys failed at their home to secure their first victory. They shared points with the Eagles.

Liverpool manager Jurgen Klopp set up his team formation with 4-3-3. He kept Darwin Nunez in the starting XI for the first time in EPL. Meanwhile, Patric Vieira played his team in a 5-4-1 formation.

As the home team, Liverpool tried to play attacking football from the start of the match. But the visitors stunned them in the first half. Palace’s striker Wilfried Zaha scored a brilliant goal in the 31st minute. Liverpool couldn’t find the equalizer in the first half.

Moreover, Liverpool became a ten-men army in the second half as Darwin Nunez was sent off in the 57th minute. But Luis Diaz rescued Liverpool with a crucial goal. He found the net in the 61st minute. However, both teams couldn’t score more in the remaining minutes. As a result, the match ended in a 1-1 tie.

Atletico Madrid have started their journey in the new campaign with a massive victory. Last night, they defeated Getafe with three goals margin. Atletico Madrid took the lead in the 15th minute as Alvaro Morata found the net with the help of Joao Felix.

The Spain international was brilliant in the second half as well. He doubled the lead in the 59th minute. Joao Felix once again helped him to score that goal. Moreover, Felix completed his hattrick of assists in the 75th minute when Griezmann converted his pass into a goal. Getafe couldn’t return one. As a result, Atletico Madrid won their first match by a 3-0 margin.

Juventus have made a strong start in Serie A as they defeated Sassuolo at their home. As a debutante for Juventus, Angel Di Maria performed extremely well. He scored one and assisted Dusan Vlahovic in his second goal. With Vlahovic’s two goals and Di Maria’s one, Juventus defeated Sassuolo by a 3-0 margin.