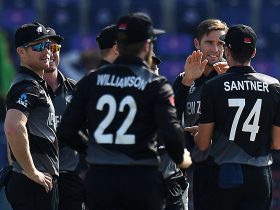 The ICC Men’s T20 World Cup started today with the match between Sri Lanka and Namibia. Both teams faced off today in the Group stage at the GMHBA Stadium, where Namibia stunned the Asia Cup Champion. Namibia defeated the Lankans by 55 runs to register their first victory in the T20 World Cup.

Dasun Shanaka, the T20 captain of Sri Lanka, won the toss and opted to bowl first against Namibia. So, Namibia started their batting innings with Michael Van Lingen and Divan la Cock. Unfortunately, both failed to get a good start for Namibia. They lost their first wicket in the 2nd over as Dushmantha Chameera. The other opener also followed the same path. As a result, Namibia lost two wickets within three overs.

After that, Loftie-Eaton tried to tackle the initial disaster with Stephan Baard. They added 19 runs together on the scoreboard. Then, Loftie-Eaton departed the crease after scoring 20 runs from 12 balls. In addition, Stephan Baard and Gerhard Erasmus added 26 and 20 runs respectively before leaving the pitch.

However, the momentum for Namibia changed when Jan Frylinck came into the pitch. He was super aggressive between the two wickets. Jan Frylinck tried to hit every ball he faced. Moreover, he made a crucial partnership of 70 runs with another hitter batsman, JJ Smith. Jan Frylinck scored the highest 44 off 24 balls before losing his wicket. On the other side, JJ Smith remained not out in 31 runs. Relying on these two big scores, Namibia set a target of 164 runs for the Lankans.

Chasing the target, Sri Lanka lost their first wicket in the 2nd over. Moreover, Sri Lanka lost two more wickets in the 3rd over as Ben Shikongo picked up Pathum Nissanka and Danushka Gunathilaka.

Namibia’s bowlers were on fire to defend their runs. Ben Shikongo, David Wiese, Bernard Scholtz, and Jan Frylinck picked up two wickets each for Namibia. Their superb bowling performance tied up Sri Lanka by 108 runs. As a result, Namibia got a massive victory by 55 runs against Sri Lanka in the opening match of the ICC Men’s T20 World Cup. The three-match ODI series between India and Sri Lanka started ...