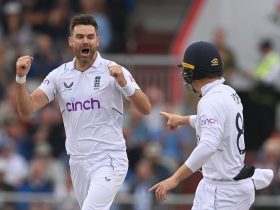 England are in the driving seat against South Africa

The three-match T20 series between Ireland and New Zealand started yesterday. Ireland welcomed New Zealand at Stormont to play the first T20 match of the series. Ireland couldn’t fight enough in the T20 like the ODI series. They lost the game by 31 runs against the Black Caps. However, New Zealand batsman Glenn Phillips became the Player of the Match for his brilliant batting.

Andrew Balbirnie, the skipper of Ireland, won the toss at the Stormont and decided to bowl first. So, Martin Guptill and Finn Allen came into the pitch to start the innings for New Zealand. As it was a T20 match, both batsmen tried to be aggressive from the beginning of the game.

But they couldn’t go far enough. In the 3rd over, Joshua Little broke their partnership by taking the wicket of Finn Allen. Moreover, Martin Guptill, the other opener, lost his wicket in the following over. But before his departure, Guptill scored 24 off 12 balls. Ireland’s bowlers did a brilliant job in the first ten overs. They picked up another wicket as Dane Cleaver departed the pitch in the 5th over.

It seemed New Zealand could become all-out before 100 runs. But Glenn Phillips then played a crucial role for the Black Caps. He made a brilliant partnership of 46 runs with James Neesham. Unfortunately, Neesham lost his wicket after scoring 29 off 16 balls. But Glenn Phillips continued scoring runs. He remained not out in 69 runs. Relying on his bat, New Zealand ended their innings in 173 runs.

Chasing the target, Ireland were never on track. They lost many wickets constantly. Ireland picked up 21 runs in the opening partnership. But between 32 to 37 runs, they lost three more wickets. However, Curtis Campher tried hard to tackle the initial disaster. He played every ball very carefully. But Lockie Ferguson didn’t let him make a big score. He picked up Curtis Campher in the 13th over. After that, the remaining batters of Ireland couldn’t score enough to win the match. They became all out in 142 runs. As a result, New Zealand won the first T20 by 31 runs.