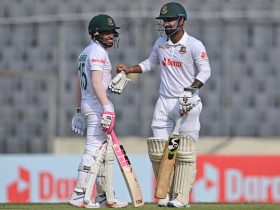 The Bangladesh Cricket Board has arranged a five-match T20 series with New Zealand. The first T20 match of the series is going to start tomorrow. Both teams are confident to win the first game. The first match will be played at Sher-e-Bangla National Cricket Ground.

Bangladesh have played T20 matches with New Zealand several times. In total, seven T20 matches have been played between the two teams. New Zealand have won all of the games against Bangladesh. Bangladesh is yet to win against the Black Caps.

Don’t miss:  South Africa go 1-0 up in the series against England

Both teams have an exciting group of players. Some important players can change the game at any moment.

Shakib Al Hasan is one of them for Bangladesh. He is the number one T20 all-rounder in the world. He helps the team in every game. Shakib is famous for taking wickets. When the team needs a breakthrough, Shakib can do this. We pick Mushfiqur Rahim as another key player for Bangladesh. He missed the Australia series, but now he is back in the squad. He can play long innings. His batting ability is fantastic. Shakib and Mushfiq can be two key players for Bangladesh.

On the other side, we pick Henry Nicholls and Matt Henry as the key players for Black Caps. Henry Nicholls is a very power-hitting batsman. His ability to hit the ball is mind-blowing. If he starts hitting from the start of the match, New Zealand can score a huge run. However, we pick Matt Henry as a key player for his bowling pace. He can bowl at high speed. Another advantage of Matt Henry is his bouncing bowling. He can bounce the ball extremely well.

For some exciting players, both teams have a chance to win the series. The first T20 match will start tomorrow at local time 4 pm. You can watch the match on Tsports.