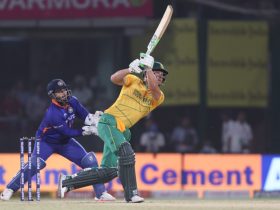 The luck didn’t favor Ireland once again. They went so far but couldn’t win the match. Despite playing brilliantly against New Zealand, Ireland lost the high-scoring game by only one run. As a result, New Zealand won all three matches in the series and white-washed Ireland.

Ireland welcomed New Zealand at the Malahide Cricket Ground to play the third ODI of the series. In this match, New Zealand’s skipper Tom Latham won the toss and decided to bat first. So Martin Guptill and Finn Allen came off the pitch to start the innings for New Zealand. Both batsmen were very aggressive from the beginning of the match. They started hitting boundaries from the very first over. However, their partnership broke in the 10th over when Finn Allen departed the pitch after scoring 33 runs. After a while, the Kiwis lost another wicket as Will Young left the pitch.

On the other side, Martin Guptill kept scoring runs. He made another partnership of 60 runs with the skipper Tom Latham. Unfortunately, the skipper had to stop in 30 runs. But Guptill didn’t miss the century. Before losing the wicket, Martin Guptill scored the highest 115 runs for New Zealand. In addition, Henry Nicholls added a very important 79 runs in the lower order. Relying on their scores, New Zealand set a target of 361 runs for Ireland.

Chasing the massive target, Ireland lost their first wicket in the second over. After that, Paul Stirling made a partnership of 55 runs with the new batter, Andy McBrine. But Kiwi pacer Matt Henry didn’t let them make a big partnership. He took the wicket of Andy McBrine in the 10th over.

After that, Paul Stirling made a magnificent partnership with Harry Hector. They ruled the Kiwi bowlers. The way they batted against New Zealand, it seemed Ireland could chase the massive target. Together they added 179 runs on the scoreboard. Moreover, both batsmen picked up centuries in this match. Paul Stirling stopped in 120 runs, while Harry Hector lost his wicket after scoring 108 runs. In the last over, Ireland needed 10 runs to win the match. Unfortunately, they picked up eight runs from the final over. As a result, New Zealand won the match by one run only.