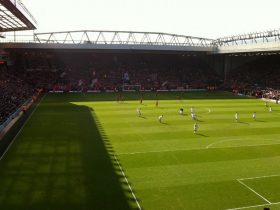 Newcastle United defeated Everton at their home ground, St. James’ Park. Last night, the home team netted three times despite conceding the first. As a result, they have got out of the relegation zone and standing in the 17th. Newcastle are now just one point behind the Toffees.

On the other side, Everton FC lost four consecutive league matches for the first time since October 2019. They are now just three points ahead of the relegation zone.

Everton were one of the busiest clubs in the last winter transfer window. They have appointed Frank Lampard as the new permanent manager. The Toffees have also signed Donny Van de Beek and Dele Ali. But, their performances have not changed. In addition, Frank Lampard is the first Everton manager to lose his first league game since 1977.

At St. James’ Park stadium, the home team manager Eddie Howe set up the team formation with 4-3-3. Kieran Trippier, who joined Newcastle United from Tottenham Hotspur, started yesterday for the very first time in the league. On the other side, Everton manager Frank Lampard played his team in a 3-4-2-1 formation. He benched the new signings, Dele Ali and Donny Van de Beek.

Don’t miss:  Liverpool continue to struggle in the EPL

However, the visitors dominated from the beginning of the match. They also created more chances than Newcastle. So, they took the lead in the 36th minute of the game. It was the own goal of the home team defender Jamaal Lascelles. However, Everton couldn’t hold the lead for very long. They conceded within two minutes. As a result, the first half ended in 1-1.

Returning from the break, the home team accelerated their pace of attacking. During the entire match, Newcastle United took 20 shots. Consequently, they took the lead in the 56th minute. Their striker Ryan Fraser netted the ball for the home team. After that, Everton tried so hard, but they couldn’t find the net because of the poor finishing of their strikers.

The Toffees manager Frank Lampard deployed Donny Van de Beek and Dele Ali to find the equalizer. But the scoreline remained the same. Moreover, the hosts scored their third goal. Their new signing Kieran Trippier scored that goal from a brilliant free-kick. It was his first goal for Newcastle. However, Everton couldn’t score more in the remaining minutes. So, Newcastle United won the match at St. James’ Park.