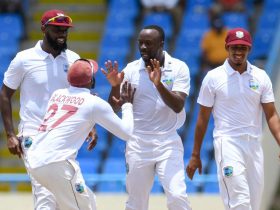 West Indies are close to winning the Test

Pakistan have leveled the series against England as they earned a dramatic victory at the Karachi Stadium. In the final over drama, Pakistan defeated the visitors by three runs. As a result, the home team leveled the series after playing four of the seven matches.

Toss: England’s skipper Moeen Ali won the toss in the 4th T20 match and decided to bowl first against the home team.

Pakistan had a flying start relying on Babar Azam and Mohammad Rizwan’s bat. Both batsmen have been very consistent in picking runs in this series. Last night, both batsmen ruled the English bowlers as they have been doing this in the previous games.

They kept the run rate at 10 per over in the powerplay. However, Mohammad Rizwan showed again why he is the no. 1 batsman in T20 cricket. He tried to hit every ball he faced. With the skipper, Mohammad Rizwan added 97 runs on the opening wicket. Babar Azam lost his wicket after scoring 36 runs, but Mohammad Rizwan kept scoring runs. He scored the highest 88 runs in 67 balls before losing his wicket to Reece Topley.

Middle-order failed to contribute much

English bowlers eventually started dominating. They couldn’t let Pakistani batsman score runs easily. Although Mohammad Rizwan continued scoring but the other batters couldn’t contribute enough. Due to the tight bowling from the English bowlers, Pakistan ended their innings in 166 runs.

The top order of England failed once again to get a good start. They lost three wickets in just two overs. Pakistani bowlers Mohammad Nawaz and Muhammad Hasnain destroyed the English top order. Due to their aggression, Phil Salt, Alex Hales, and Will Jacks lost their wickets.

Good Response from the middle order

In the last two overs, England needed only nine runs. It seemed Pakistan were losing the match. But Haris Rauf kept the game alive by taking important two wickets. He picked up Liam Dawson, who scored 34 off 17, and Olly Stones. As a result, England needed four runs in the last over. But they only have one wicket left. Unfortunately, England couldn’t make it as Reece Topley became runs out in the final over. Therefore, Pakistan won the thrilling match by three runs.