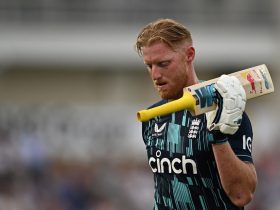 Pakistan have arranged a three-match ODI series at home against West Indies. Yesterday, the home team played the first ODI match of the series at Multan Cricket Stadium, where they defeated the West Indies by five wickets. Khushdil Shah won the Player of the Match award for his outstanding batting display. He scored a destroying 41 off 23 balls only.

Nicholas Pooran, the captain of West Indies, won the toss at the Multan Cricket Stadium and decided to bat first. So, Shai Hope and Kyle Mayers came off the pitch to start the innings of the Caribbean. But Pakistani pacer Shaheen Afridi didn’t let them make a long partnership. He took the wicket of Kyle Mayers in the 3rd over.

After that, Shai Hope ruled the bowlers of Pakistan. He made a brilliant partnership with the new batter, Sharmarh Brooks. Together they added 154 runs on the scoreboard. During that time, both players picked up half-centuries individually. Sharmarh Brook was unfortunate not to get the century. He lost his wicket to Mohammad Nawaz after scoring 70 runs. But, Shai Hope successfully picked up his century in this match. Before losing the wicket in 44th over, Shai Hope scored the highest 127 runs for the Caribbean. Relying on their scores, West Indies set a massive target of 305 runs in 50 overs.

Chasing the run, the two openers of Pakistan started their innings slowly. They were very careful on the pitch. Despite being careful, Fakhar Zaman had to go back to the pavilion in the 7th over. He lost the wicket to Jayden Seales after scoring only 11 runs.

Then, Babar Azam, the skipper of Pakistan, came on the pitch and accelerated the pace of scoring runs. He made an amazing partnership with Imamul Haque. They added 123 runs together on the scoreboard. However, their partnership broke when Imamul Haque lost the wicket in the 25th over. But he picked up 65 runs before leaving the pitch.

On the other hand, the Pakistani skipper never stopped. He got a brilliant hundred in the match. He scored 103 runs for Pakistan before losing the wicket. After that, Mohammad Rizwan and Khushdil Shah played superbly to chase the target. Rizwan scored 59, while Khushdil played a tornado innings to seal the victory. He scored 41 runs from 23 balls. As a result, Pakistan won the match by 5 wickets.