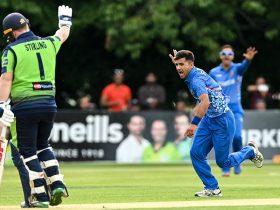 Pakistan have won the T20 series against the home team, Bangladesh. They have won two matches in a row. However, there is still one match to play in this T20 series. Today Pakistan secured the series, defeating Bangladesh in the second T20 by eight wickets.

In the first game, Pakistan won by four wickets. But it was not an easy game for the visitor. They had to wait for the last over to win the first match. Today they win easily against the home team.

Bangladesh skipper Mahmudullah Riyad won the toss today and decided to bat first at Sher-E Bangla Stadium.  Two young lads, Mohammad Naim and Saif Hasan started batting for Bangladesh. But they have failed again, like in the first T20 match. Bangladesh lost their first wicket in the very first over.

Opener Saif Hasan lost his wicket in the fifth ball of the first over. In the second over, Bangladesh lost another wicket. Mohammad Naim had to go back to the pavilion in the over of Mohammad Wasim.

Then Najmul Shanto tried to settle down on the pitch. He made a partnership of 46 runs with Afif Hossain. But Afif could not stay longer on the pitch. He lost his wicket to Shadab Khan after scoring 20 runs.

On the other side, Najmul Shanto made the highest individual runs for Bangladesh. He scored 40 off 34 balls. Except for him, no other batsmen score enough runs for the home team. As a result, Bangladesh gave a target of 109 runs to the visitors.

Chasing 108 runs, Pakistan lost only two wickets to win the game. Pakistan captain Babar Azam lost his wicket to Mustafizur Rahman in the third over. But the other opener, Mohammad Rizwan, performed gently. He batted very carefully as the target was not big enough.  He made a partnership of 85 runs with the new batsman, Fakhar Zaman. However, Mohammad Rizwan lost his wicket after scoring 39 runs from 45 balls.

On the other side, Fakhar Zaman finished the game with Haider Ali. Both were not out in the game. Fakhar Zaman got a half-century today. He scored an unbeaten 57 runs from 51 balls. However, Haider Ali remains unbeaten on six runs. As a result, Pakistan won the match by eight wickets and secured the T20 series.