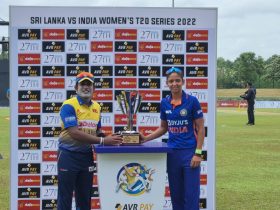 West Indies captain Nicholas Pooran won the toss at the National Stadium of Pakistan and decided to bowl first. They had a brilliant start as they picked up the wicket of Pakistani captain Babar Azam in the very first over.

On the lower order, Mohammad Newaz accelerated picking the runs. From 10 balls, he added 30 runs on the scoreboard. So after 20 overs, Pakistan scored 200 runs and lost six wickets.

Chasing the target of 201 runs, West Indies could not score enough. Opener Shai Hope was the only batsman who scored 30 runs for the Caribbean. However, captain Pooran added 18 runs on the scoreboard. But because of the aggression of Pakistani bowlers, the visitors became all-out in 137 runs.

West Indies had a great chance to equalize the series. Their bowlers did well in this game. They did not allow the batsman of Pakistan to score a big run.

However, Mohammad Rizwan scored the highest 38 runs for the home team. Depending on him, Pakistan scored 178 runs in this innings. They lost eight wickets in the second match. However, West Indies were close to winning the game. But in the end, Pakistani bowlers picked up all of the wickets of the visitors. Brandon King was the only batsman for the Caribbean to get a half-century in this innings. He added 67 runs before losing the wicket.

Don’t miss:  Rohit's injury did not stop India from winning

But the lower order batsmen could not support him to win the game. As a result, they lost the 2nd T20 by nine runs. The home team pacer, Shaheen Afridi, picked up three wickets of the Caribbean. Besides, Mohammad Newaz, Mohammad Wasim, and Haris Rauf took two wickets each.