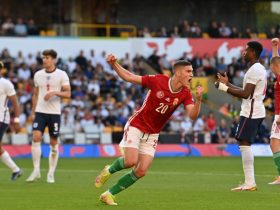 Portugal played their last friendly before the FIFA World Cup against Nigeria. However, they beat Nigeria last night at Estadio Jose Alvalade without their biggest star, Cristiano Ronaldo. Manchester United’s midfield maestro Bruno Fernandez scored two goals in this match to get their best preparation for the World Cup.

Portugal hosted a friendly match against Nigeria last night before flying to Qatar. In this match, Portugal boss Fernando Santos set up the team formation with 4-1-2-1-2.

Cristiano Ronaldo, who has given a controversial interview, missed this match for Portugal. So, Joao Felix and Andre Silva played in the front. Bruno Fernandes and Bernardo Silva played in the midfield. On the other hand, Nigeria’s manager played his team in a 4-4-1-1 formation.

Nigeria didn’t qualify for the World Cup due to their poor performance in the qualifying round. Their poor form continued last night as well. Nigeria conceded the first goal at the very beginning of the match. In the 9th minute, Bruno Fernandes scored this goal with the help of his Man United team-mate, Diogo Dalot.

Returning from the break, managers from both sides made several changes to their squads. But the visiting team couldn’t make enough chances to score a goal. Moreover, Portugal’s defenders were rock solid on the back. They didn’t let the strikers break the line.

Moreover, Portugal scored two more goals in the final ten minutes. In the 82nd minute, Goncalo Ramos found the net for the host. Two minutes later, Portugal got their fourth goal as Joao Mario scored a stunner in the 84th minute. Therefore, Portugal arrived in Qatar with a great victory against Nigeria.

The video of Bruno Fernandes and Ronaldo’s handshake has gone viral. It seemed Fernandes was ignoring Ronaldo. Fernandes, however, clarified that it was a joke with Ronaldo. Bruno said, “That is still clear, that in his mind, the main thing here is the national team and us so we have to be focused on the World Cup.

“You don’t have a chance to play a World Cup many times – Cristiano did really well to play five times, this will be his fifth time – so everyone is ready for that, everyone wants to give their best for the team,” Bruno added.

He also stated, “This is the national team, Manchester United will be my focus after the World Cup, after December 18, because that is the final. I have no problem with anyone. I do my job. You have to control yourself, give your best and that’s it.”