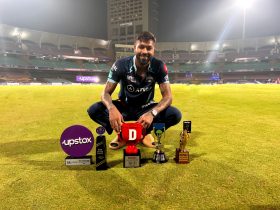 Gujarat Titans are flying in the IPL

Punjab Kings ended the winning run of Gujarat Titan. Last night, they beat the table topper by 8-wickets with 24 balls in their hands. This victory moves Punjab Kings to the 5th place. They also have equal points as Sunrisers Hyderabad. But the Kings are one step behind Hyderabad because of the low run rate.

On the other hand, Gujarat Titans remain on the top of the table despite losing the match. They earned 16 points from 10 games. Meanwhile, their closest rival, Lucknow Super Giants, stands in 2nd place with 14 points.

Gujarat Titans’ skipper Hardik Pandya took a different decision in this match. Almost all the captains have selected to bowl first after winning the toss. But Hardik Pandya selected to bat first after winning the toss at the Mumbai Stadium. So, Gujarat Titans started the innings with Wriddhiman Shaha and Shubhman Gill. Shubhman Gill was unfortunate in this match as he was run out. He added only nine runs on the scoreboard. Moreover, the other opener also couldn’t survive for long. He lost the wicket in the 4th over after scoring 21 runs.

After that, Sai Sudharsan tried to make resistance. He couldn’t get any help from the remaining batsmen. The captain also failed to score a notable run. But Sai Sudharsan fought alone. He remained not out in 65 runs. Relying on his bat, Gujarat Titans scored 143 runs in 20 overs.

Chasing down the target, Punjab Kings also lost an early wicket. English opener Jonny Bairstow had to go back to the pavilion after scoring only one run. But Shikhar Dhawan played brilliantly to tackle the initial disaster. He made a brilliant partnership of 87 runs with the new batsman, Bhanuka Rajapaksa. Both players were too aggressive on the pitch. However, Bhanuka Rajapaksa lost the wicket in the 12th over. But before losing the wicket, he added a quick 40 runs from 28 balls.