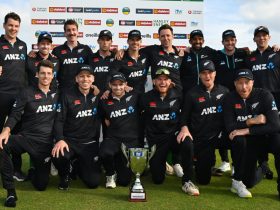 Australia have come to Pakistan to play a three-match test series. However, the first test match has drawn between the two teams. The batsmen from both sides dominated the entire game. Pakistani opener Imamul Haque became the Player of the Match for his brilliant batting. He scored a back-to-back century in the two innings of this match.

But, Imamul Haque made another brilliant partnership with Azhar Ali. Both added 208 runs together on the scoreboard. Opener Imamul Haque picked up a century in the first innings. Before losing the wicket, he scored 157 runs for the team. On the other side, Azhar Ali departed after picking up 185 runs. Relying on these two batsmen, Pakistan declared their innings in 476 runs.

Pakistani bowler, however, picked up some quick wickets in the lower order. Spinner Nauman Ali picked up six wickets alone. So, the visitors became all-out in 459 runs. As a result, the home team took the lead of 17 runs in the first innings.