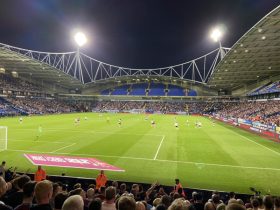 Eintracht Frankfurt started their Bundesliga campaign with a massive defeat against FC Bayern Munich, conceding six goals. Besides, Real Madrid had a well pre-season preparation. So, Madrid’s manager Carlo Ancelotti got a squad full of motivated and energetic against Frankfurt. He set up the team formation with 4-3-3. Meanwhile, Frankfurt’s manager played his team in a 3-4-2-1.

Both teams played relatively well from the start of the match. Real Madrid’s goalkeeper Thibaut Courtois had to make some good saves in the first half. However, the Los Blancos took the lead just before halftime. Defender David Alaba scored that goal in the 37th minute with the help of Casemiro. Eintracht Frankfurt couldn’t return one in the remaining minutes. As a result, Real Madrid went to the break, taking a one-goal lead.

Returning from the interval, Frankfurt were desperately seeking goals, but the Los Blancos defended very well. Moreover, Real Madrid doubled their lead as Karim Benzema found the net in the 65th minute with Vinicius Junior’s assist. With this goal, Karim Benzema has become the 2nd highest goalscorer of Real Madrid, surpassing Raul’s 323 goals. Anyway, both teams couldn’t score more in the remaining minutes. As a result, Real Madrid won the match and became the champion of the UEFA Super Cup.

Real Madrid’s manager Carlo Ancelotti has shared his opinion about the final match. While talking to the media, Ancelotti said, “Eintracht were very closed and we found it difficult to find our rhythm, but we did it well then. It’s difficult at the beginning of the season to be in top form but we now have won to start the season well.”