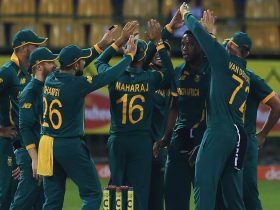 New Zealand have welcomed South Africa to play a two-match test series. The home team won the first match in style. But the visitors took revenge in the second game. South Africa have leveled the two-match test series by winning the second match at the Hagley Oval. After losing the first test by an innings and 276 runs, the Proteas have come back very strongly in the second match. They beat the Kiwis by 198 runs and finished the series in a tie. As a result, the Proteas have maintained the unbeaten series record against New Zealand.

Dean Elgar, the captain of the Proteas, won the toss and decided to bat first in the second game. He started the innings with Sarel Erwee, and their starting was very well. Both players batted with a cool head from the start. Elgar and Sarel Erwee added 111 runs in the opening partnership. Then the skipper lost his wicket after scoring 41 runs for the team.

On the other hand, Sarel Erwee continued scoring runs. He made a partnership of 88 runs with the new batsman, Eiden Markram. Erwee got the century in this innings while Markram had to go back to the pavilion after scoring 42 runs. Unfortunately, Erwee departed in the next over. Relying on this bat, the visitors scored 364 runs before losing all the wickets.

This second test has started as a nightmare for the home team as they lost their first wicket in the first over. Tom Latham returned to the dressing room without scoring runs. The other opener also departed in the fifth over. After that, Devon Conway and Henry Nicholls tried to handle the situation, but it didn’t work out. Daryl Mitchell and Colin de Grandhomme played well in the lower order. Mitchell scored 60, and Grandhomme remained not out in 120 runs. However, the Kiwis scored 293 runs in the first innings.

In the second innings, the visitors looked relaxed after taking a 71-run lead in the first. However, they had not started like they had in the first. They lost four wickets in 104 runs, but Kyle Verreynne fought alone in the middle order. He remained not out in 136 runs. Anyway, South Africa declared the innings after scoring 354 runs.

As a result, New Zealand needed 426 runs to win the match. But, their top order failed again. Kiwis lost four wickets before hundred runs. Devon Conway scored the highest 92 runs for the team, but that wasn’t enough to win the match. So, the Proteas won the game and have leveled the series.