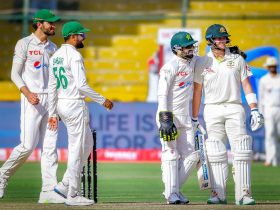 England have welcomed South Africa to play a three-match test series. The first test of the series started last Wednesday and ended last night with South Africa’s victory. They defeated the home team by an innings and 12 runs at Lord’s Cricket Ground. As a result, South Africa have taken a 1-0 lead in the three-match series.

Dean Elgar, the captain of South Africa, won the toss and decided to bowl first. So Alex Lees and Zak Crawley came into the pitch to start the innings for England. But they failed to make a good start as both batters lost their wicket in 25 runs.

After that, Ollie Pope came into the crease and tried to build a partnership with Joe Root. But Root couldn’t stay long. He left the pitch after scoring only 8 runs. Bairstow, the following batter, returned to the crease without scoring any runs for the team. However, captain Ben Stokes helped Ollie Pope to make a partnership. Together they added 45 runs on the scoreboard.

Then Arnich Nortje picked up the wicket of Ben Stokes to break their partnership. Stokes scored 20 runs before losing the wicket. On the other side, Ollie Pope added the highest 73 runs for England. But the remaining batters couldn’t contribute enough to the team. As a result, England became all out in 165 runs.

South Africa had a flying start in their first innings. Captain Dean Elgar made a brilliant partnership with Sarel Erwee. They added 85 runs in the opening partnership. Before losing the wicket, Elgar scored 47, and Sarel Erwee got 73 runs for the team.

After that, South Africa lost two more wickets in a short time. But Marco Jansen and Keshav Maharaj played a crucial role in the middle order. Marco Jansen added 48 runs, while Maharaj lost his wicket after scoring 41 off 49 balls. Depending on their score, South Africa scored 326 runs in the first innings and took a lead of 165 runs.

England got a better start in their second innings. They played seven overs without losing wickets. But their partnership broke when Zak Crawley lost his wicket. Alex Lees scored the highest 35 runs for England. But due to the high aggression of Proteas bowlers, the English batter lost their wickets constantly. Pacer Arnich Nortje took three wickets alone. Thus, England were all out in 149 runs, so South Africa did not have to play the second innings. As a result, the Proteas won the 1st test by an innings and 12 runs.