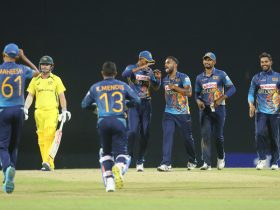 Sri Lanka had a good start as their two openers batted carefully. Oshada Fernando and Dimuth Karunaratne picked up 92 runs in the opening partnership. But their partnership ended in the 21st over as Oshada Fernando lost his wicket to Mohammad Nawaz. However, he scored 50 runs before his departure. The next batsman also failed to get runs.

After a while, Dimuth Karunaratne, the captain of Sri Lanka, lost his wicket to Yasir Shah. But before his departure, the skipper added 40 runs on the scoreboard. It seemed Sri Lanka couldn’t cross 200 runs. But Angelo Mathews and Dinesh Chandimal took the responsibility. Together they added 75 runs on the scoreboard. Unfortunately, Mathews left the pitch in the 60th over, scoring 42 runs. But Chandimal kept scoring runs.

With Dhananjaya de Silva, Chandimal added another 63 runs on the scoreboard. However, Chandimal’s brilliant innings ended in the 75th over. He scored the highest 80 runs for the home team. He also hit nine boundaries and two over boundaries. Furthermore, Niroshan Dickwella contributed much in the lower order. He added a quick 50 runs for the team. But due to the aggression of the Pakistani bowlers, the remaining batters of Sri Lanka couldn’t score much. As a result, Sri Lank ended their first innings in 378 runs.

In chasing Sri Lanka, Pakistan made a poor start. They lost the first wicket in the very first over as Abdullah Shafique departed the pitch without scoring any runs. Then Imamul Haque tried to build a partnership with the captain, Babar Azam. But the skipper couldn’t stay longer. Babar Azam lost his wicket to Prabhat Jayasuriya after scoring only 16 runs.

Moreover, Lankan spinner Ramesh Mendis was very deadliest in this match. He picked up three wickets alone as of now. Due to his aggression, Pakistan lost six wickets. Now Agha Salman and Yasir Shah are batting on the pitch. As of now, Pakistan scored 145 runs and have lost six wickets.