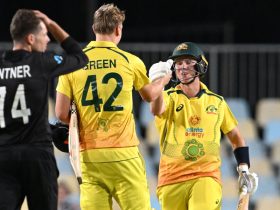 After losing the first match, Sri Lanka won the next two consecutive games to take a 2-1 lead in the five-match ODI series against Australia. Today, they defeated the Aussies by six wickets at the Premadasa Stadium. Pathum Nissanka, the batsman of Sri Lanka, won the Man of the Match award for his brilliant 137 runs. However, the Lankan just need to win one of the remaining two games to seal the series.

At the Premadasa Stadium, Aussie skipper Aaron Finch won the toss and decided to bat first. The visitors were very desperate to get back to their winning track. So, Aaron Finch and David Warner tried to start the innings aggressively. Unfortunately, David Warner failed to keep that tempo. He lost the wicket to Dushmantha Chameera in the 3rd over.

After that, the skipper tried to build a partnership with the new player, Mitchel Marsh. Together they added 33 runs on the scoreboard. But, Marsh failed to contribute much as he departed the pitch after scoring only 10 runs. On the other hand, Aaron Finch kept fighting. He scored 62 runs before losing the wicket to Jeffrey Vandersay. Finch hit four boundaries and one sixes.

In addition, Alex Carey and Travis Head made an amazing effort to make a challenging target for Sri Lanka. Alex Carey added 49 runs, while Travis Head remained not out in 70 runs. He hit three sixes as well as three fours. Relying on these runs, Australia scored 291 runs in 50 overs.

Chasing the target, the home team started their inning a bit slowly. They planned not to lose any wickets in the powerplay. But Glenn Maxwell didn’t let it happens. He picked up the wicket of Dickwela. The Lankans dominated the rest of the match after losing this wicket. Pathum Nissanka made a massive partnership with the new player, Kusal Mendis. Both were looking very good on the pitch. They added 213 runs together on the scoreboard.

However, Kusal Mendis couldn’t continue as he departed the pitch after being injured. But before his departure, he scored 87 runs for the team. On the other hand, Pathum Nissanka was too good on the pitch. He scored the highest 137 runs for the team, which earned a thrilling victory for Sri Lanka.

Don’t miss:  India are on the edge of being knocked out