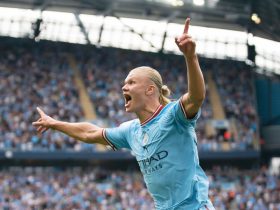 The Premier League champion Manchester City will face the UEFA Champions League champion Chelsea on Saturday. This match is very important for both teams. It is also significant for Pep Guardiola because he lost three times against Chelsea in the last season. On the other hand, Manchester United will face Aston Villa as the visiting team. Both games will start at the same time.

The match between Chelsea and Manchester City is the most exciting game today. It’s not just a game, but also the Cold War between Pep Guardiola and Thomas Tuchel.

Today is a great chance for Pep Guardiola to take revenge on Chelsea. Manchester City already have dropped some essential points in the league. They are three points behind the league topper. On the contrary, Chelsea are in the top position alongside Liverpool and Manchester United. That is why this match is going to be a massive game for both teams.

Man City midfield maestro Kevin de Bryne and winger Phil Foden have played the full 90 minutes in the Carabao Cup. So, it is expected that both of them are available for the Chelsea clash. There are some doubts over Ilkay Gundogan and Zinchenko. However, Rodri, Stones, and Laporte trained with the squad.

Chelsea midfielder Mason Mount and Christian Pulisic are ruled out for the injury. But Eduardo Mendy is back on the team. He missed the last match against Aston Villa in the Carabao Cup.

Manchester United will play against Aston Villa at Old Trafford. Manchester United have been knocked out of the Carabao Cup after losing to West Ham United. Edinson Cavani could play today, Ole Gunnar Solskjaer hinted at the press conference. He said,

I’m sure that’ll be a good partnership as well, wanting to be on the end of things. We’ve seen some teams dropping deeper against us, not giving us as much space in behind and that’s definitely two boys you’d like to have around the goal when that’s the scenario. I can see them two working well together.

Manchester United is in third place although they have equal points with Liverpool and Chelsea. On the other side, Aston Villa are in tenth place.