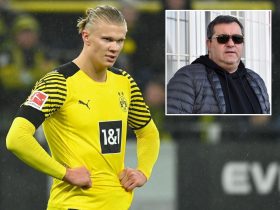 A lot of things are happening inside Manchester United. They have been very busy these days. Manchester United are still dealing with Frankie de Jong. Meanwhile, they have signed Tyrell Malacia and Christian Eriksen. But the official announcement is yet to come. However, the biggest news for Manchester United is that Cristiano Ronaldo wants to leave the club.

Cristiano Ronaldo has made massive news in the transfer market. He has told the club that he would like to leave Manchester United if a suitable offer comes. Moreover, Ronaldo missed the first training session ahead of the new season.

Ronaldo joined Manchester United the last summer under the manager, Ole Gunner Solskjaer. Despite being out of the top four, Cristiano Ronaldo scored 18 goals in the English Premier League for Man United. He was also the top scorer for Man United. But why does he want to leave the club after just one season?

Ronaldo was very ambitious to win trophies at Man United. But the club didn’t win silverware in the last season. Moreover, Ronaldo is very concerned about the future of this club as Man United are not signing enough in the current window. Ronaldo also believes the Reds can’t be a title contender in the upcoming season. That is why he wants to leave the club. But Manchester United do not want to sell him as they have a contract with Ronaldo until 2023. The club declares that Ronaldo is not for sale. But Manchester United have to convince Ronaldo to stay.

Manchester United have completed their second signing of this window. Christian Eriksen, the Denmark International, has agreed with Manchester United to join the club. It’s a massive move for Eriksen as he had a serious cardiac attack during the Euro 2020. It was very uncertain whether he could return to football.

Fortunately, Eriksen made a brilliant comeback and joined Brentford FC in the middle of the previous season. However, Christian Eriksen will play for Manchester United for three years. He will complete his medical in a few days. After that, Manchester United will officially announce Eriksen as a Manchester United player.