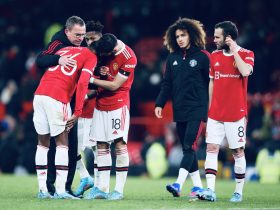 Manchester United are out of the FA Cup

Manchester United have already landed Christian Eriksen, Lisandro Martinez, and Tyrell Malacia. Last night, they completed the signing of Casemiro, the five-time UCL winner. But Manchester United have been trying to get Frankie de Jong since the start of the summer transfer window. But it seems almost impossible to sign the Netherlands international as he only wants to stay at Barcelona.

However, Man United are trying to get a winger as the future of Cristiano Ronaldo is uncertain. Therefore, Erik ten Hag wants to land the Brazilian winger Antony. The relationship between Erik ten Hag and Antony is quite well. That is why the manager convinced Antony to join Man United.

But Ajax do not want to lose any more players this season. They turned down Man United’s 60 million euros offer for Antony. Meanwhile, Antony is pushing Ajax to sell him as he desperately wants to play in the English Premier League. He also missed two training sessions for Ajax. On the other hand, Manchester United are preparing a better bid for Antony. According to The Daily Sun, Man United are ready to offer 80 million euros for the Brazil international. The coming hours will be a key factor for both parties.

However, Manchester United have another option if they fail to get Antony. PSV forward Cody Gakpo is on the list on Man United’s radar. The Red Devils could get him at a cheap rate than Antony. However, Man United haven’t made any official bid for Gakpo. But the player wants to join the Red Devils. Speaking about Cody Gakpo, the PSV manager said, “there are a lot of rumors for a long time. But it is clear that we would love to keep Gakpo here at PSV.” ” He never changed his attitude in training after the rumors, that is so good for a young player,” the manager added.